Tradewinds… the building surounded by water but with no water. 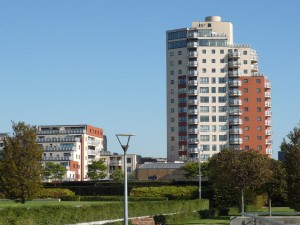 Residents at Royal Docks apartment block, Tradewinds, awoke this morning to find themselves without water again for the second time in two weeks.

A source close to the problem advised that water, caused by a leak from a flat in Block A, had got into the electricity system and resulted in the power to some communal areas and the main water pump having to be shut down for safety.

Most affected were those living in the Tradewinds tower who were left suddenly with no water, many of whom had to resort to bottled water to wash and clean their teeth. The seventeen storey riverside tower, originally touted as a luxury development, was the first in Newham to have an apartment which broke the £1 million barrier when it was built in 2003.

One resident, told our reporter that leaks have been an intermittent problem since the development was built. At one point in 2006, the whole tower flooded and residents had to be evacuated to local hotels whilst the building dried out. Developer, Barratt Homes used plastic plumbing for speed on the original build, often concealing pipework behind walls and inaccessible panels within the flats making it difficult for homeowners to detect if they have a water leak.

It was a similar story just eight days earlier, when faulty electrics caused the pump to fail and water was off for nearly two days. The pump problem was known to the previous managing agent for months, but never fixed properly. Unfortunately, for the tower dwellers, this time it was a Sunday and the necessary repairs and parts couldn’t be sourced until late the following day. However, we know that at least one of the savvy docklands residents was fortunate enough to have gym membership at the local royal docks gym and at least managed to take a warm shower there.

The management of the development recently changed hands on the 8th September, when residents finally succeed in ousting the incumbent management company ‘Peverel OM’ after nearly a two year struggle due poor maintenance levels and management.  Local resident, Alastair Grant added “that these are faults that should have been resolved years ago by Peveral, now that they are gone and no longer here to cover up the issues, we are seeing the real effects of their years of neglect and the true state they have left the development in”.

Residents are hoping that new managing agent, Urang property management can restore the property back into good health, although it could be some time as apparently Peverel are delaying handing over the residents bank account where the much needed service charge and repair funds are held.