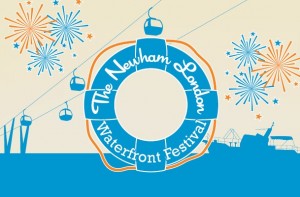 The sun is shining in Newham today with the London Waterfront Festival in Royal Victoria Dock from 2pm.

Experience a different side to the docks with live music headlined by The Bootleg Beatles, water-based activities, ‘Fun Bus’ with children’s activities and the opportunity to explore the Siemens Crystal. The event will be topped off with a fireworks finale by the water. The main stage is now up and the boats are getting ready for a busy day of FREE dock tours. Please collect a FREE ticket from 1pm at the Information Marquee, all the fun starts at 2pm.

The Newham London Waterfront Festival will be taking place at the historic Royal Victoria Dock on Saturday 29 September with a whole host of activities for all the family to enjoy.

Explore the Siemens Crystal for FREE for the first time. The Siemens Crystal is home to the world’s largest exhibition focused on urban sustainability. As a world-class centre it will stimulate discovery and learning and address questions such as what does the future look like? How can our cities cope with issues like global warming? What can we do to make a greener future? The exhibition seeks not only to educate and inform, but also to change the way we think about our urban lives.

The Crystal is split into exhibition zones which explore a range of areas including water, transport, city design and management, energy, buildings and lighting, safety and security and healthcare. Do not miss out on this unique opportunity to be amongst the first to visit an iconic green building which is sure to leave you stimulated and inspired.

There will also be steel band performances and workshops, face painting and story telling. You could also win one of 50 return flights on the Emirates Air Line (EAL) Cable Car in a raffle from the EAL tent.

If this year’s Under the Stars event has left you wanting more free fantastic live music then the Newham London Waterfront Festival is just the place to be with a live music stage headlined by The Bootleg Beatles.

Hosted by James Anthony and Ash Selector other artists performing at the event include:

Candy Apple Blue who perform a variety of musical genres ranging from rock, pop, motown, R&B, soul classics and many more. Their repertoire consists of classic hits covering the past decades right up to current present day chart toppers that will tantalise everybody, young and old.

Matshidiso is a classically trained pianist, composer and singer-songwriter and along with the piano she also plays the guitar. Although born and bred in London, she is a fluent French speaker and also writes songs in French. With musical inﬂuences from folk and French chanson to world music and gospel, along with song structures inspired by hip-hop and singer-songwriters of the 70′s, her music will both surprise and enlighten audiences.

Groupo Lokito was formed six years ago by Latin piano player Sara McGuinness and Congolese singer Jose Hendrix Ndelo to brew up an exciting blend of these two great musical styles. The band’s live show is an exuberant display of the sheer joy the music brings. The singers shift effortlessly between melodious rumba and lively salsa before the band slips seamlessly into “seben” with soaring guitars and wild choreographed dance moves which they love teaching the audience.

London School of Samba (LSS) is the UK’s original samba school, with a rich history dating back to 1984. They have taught Samba, drumming and dancing to over 31,000 individuals and have performed for millions of people over the years. They annually attend Notting Hill Carnival and Thames Festival and in recent years have performed at the Royal Festival Hall, Glastonbury Festival and travelled to Hong Kong for the Chinese New Year 2011 celebrations.
LSS aim to spread the knowledge of Brazilian Carnival arts through music, dance and costume making and offer weekly open access dance and percussion workshops on Sunday’s in Waterloo.

Orquesta Estelar is an exuberant Cuban Big Band guaranteed to get you dancing. Playing all the Cuban classics such as Cuarto de Tula and Traguito, the Estelar have played at a wide range of venues from upscale West End clubs such as Studio Valbonne and Cafe de Paris. The band also play classic Cuban songs in a variety of styles including Cha Cha Cha, Son, Mambo and Latin Jazz.

The Juggling Inferno show is performed by a group of highly skilled, professional fire dance technicians. This high energy performance piece will be choreographed to a funky soundtrack which involves the fire dancers turning themselves into human fireworks to entertain and amaze. This is a multi-layered fire and pyrotechnic show including juggling, hula hoop, fire eating, fire ropes, pyrotechnic staffs and pyrotechnic clubs. It is guaranteed to have you cheering for more.