Remember Remember the 5th of November!… the 5th is Guy Fawkes Night, a night where the skies all over London are alive with Fireworks. So get yourself some of the action, as this weekend there are several free firework displays located near to Royal Docks. They are as follows:

Saturday 3rd November: 8pm :  Blackheath Fireworks, take the DLR to Cutty Sark in Greenwich and then walk through Greenwich park to the heath which is behind… not only do you get fireworks you get a great view of canary Wharf from the top of the hill.

Want more? then on

5mins walk from there. In conjunction with the city of London, they even have lasers!. 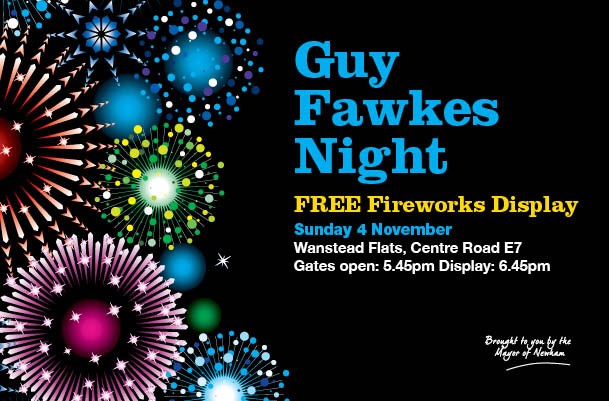 Words of “Remember Remember” refer to Guy Fawkes with origins in 17th century English history. On the 5th November 1605 Guy Fawkes was caught in the cellars of the Houses of Parliament with several dozen barrels of gunpowder. Guy Fawkes was subsequently tried as a traitor with his co-conspirators for plotting against the government. He was tried by Judge Popham who came to London specifically for the trial from his country manor Littlecote House in Hungerford, Gloucestershire. Fawkes was sentenced to death and the  form of the execution was one of the most horrendous ever practised (hung ,drawn and quartered) which reflected the serious nature of the crime of treason.

The following year in 1606 it became an annual custom for the King and Parliament to commission a sermon to commemorate the event. Lancelot Andrewes delivered the first of many Gunpowder Plot Sermons. This practice, together with the nursery rhyme, ensured that this crime would never be forgotten! Hence the words ” Remember , remember the 5th of November” The poem is sometimes referred to as ‘Please to remember the fifth of November’. It serves as a warning to each new generation that treason will never be forgotten.

In England the 5th of November is still commemorated each year with fireworks and bonfires culminating with the burning of effigies of Guy Fawkes (the guy). The ‘guys’ are made by children by filling old clothes with crumpled newspapers to look like a man.  Tradition allows British children to display their ‘guys’ to passers-by and asking for ” A penny for the guy”.